Today is an extremely important day not just in Black history but in American history – today is Juneteenth.  Weddings and marriages (a huge part of Perfête’s content),  were an aspect of everyday life that had been denied to African Americans during slavery and then heavily restricted after slavery was abolished. In honor of Juneteenth, we’re paying homage by taking a closer look at the history of Black weddings and marriage in the United States. Let’s dive in. This post was a collaborative effort between Perfete, Planfully Events, Amy Anaiz Photography, Tinsel Design, Elizabeth Austin Photography Honey & Vinyl Music, Mae B Films, Fallon Carter Events, By Dami Studios and Ilé Events.

For those who may not know, Juneteenth is a symbolic day that commemorates the emancipation of Black Americans from slavery in the United States. The Emancipation Proclamation, a presidential proclamation and executive order that freed all slaves in the Confederacy, came into effect on January 1, 1863. But, the proclamation wasn’t announced or enforced in many states including Texas.

On June 19, 1865, in Galveston, Texas, Major General Gordon Granger issued an order notifying the people of Texas that all slaves were free and that the Civil War was over. However, it should come as no surprise that this news didn’t spread quickly nor did many slaveholders pay much attention to it. People who tried to comply with the order found themselves in grave danger. But the newly freed men and women in Texas committed to marking and celebrating the date as an official end to slavery beginning in 1866.

After Texas made Juneteenth an official state holiday in 1980, 45 other states and the District of Columbia followed suit either establishing a state holiday or setting the date aside as a special day of observance.

An Ode to Black Marriages

As you know, at Perfête, we celebrate love so today we are celebrating the love and sacrifice of the people that came before us. We believe it is important to not only know, but reflect on our history and journey here today. So much has happened since slavery was abolished, especially regarding Black marriages. Here are some important milestones that got us where we are today: 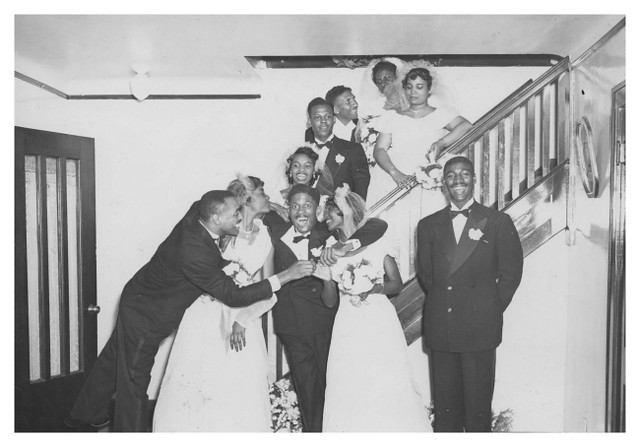 Before emancipation, slave weddings were usually officiated by the slave owner or local Black Reverend. Slaveholders typically made all the decisions when it came to slave weddings – they determined whether and when they could get married, who could marry who, and would split them apart for financial reasons. Worst of all, slaveholders would often completely violate the marriages by taking slave women as their personal concubines.

As they were not considered citizens, slave weddings had no legal binding and were not sanctified by the church. Because of this devaluation, slaves created special sacred ceremonies to make their unions special and meaningful. One famous tradition you may be familiar with is “Jumping the Broomstick.” However, its origin and significance has been debated for decades.  For slave owners, it was used as a game in which the marrying slaves would jump over a broomstick backwards as it is being held 1 foot from the ground; whoever jumped over the broomstick without touching it would be the boss of the house. This amusement and “game” was entertaining for slave owners to compete for the role of boss when they would not actually be boss. This tradition however had a much larger significance for the slaves, who felt that it was a meaningful and symbolic way to “mark” the marriage, considering they did not have rights to marry legally.

Slaves’ vows often included “until death or ​distance​ do you part.” Since they were so often heart-wrenchingly separated and sold, the concept of marriage as a lifelong bond was rarely an option.

In face of this horrific treatment, slaves still determined and guarded their own true marriage rituals in secret. When they would withdraw to their own spaces they did indeed craft rituals that established their essential dignity. Black marriage to them was a symbol of freedom and choice, a privilege they fought for us to have.

This infamous case decided in 1857 was a decade long fight for freedom by a Black slave named Dred Scott. Dred Scott unsuccessfully sued for his freedom and that of his wife, Harriet Robinson, and their two daughters.

The fact that Dred Scott & Harriet Robinson were married was a huge argument for their case; as being married (a contract between two people) gave them liberty and citizenship of America, and slaves were not considered citizens. However,  In March 1857, the Supreme Court issued a 7–2 decision against Dred Scott. In an opinion written by Chief Justice Roger Taney, the Court ruled that black people “are not included, and were not intended to be included, under the word ‘citizens’ in the Constitution, and can therefore claim none of the rights and privileges which that instrument provides for and secures to citizens of the United States.” This decision caused an outrage and was a huge factor in igniting the civil war.

Following the emancipation proclamation in 1863, the question continued to arise about marriage legality for freed blacks. The United States Congress passed legislation to legalize slave marriages in 1866. The Civil Rights Act through its provision of basic human rights (like the right to property and right to contract), implied the authority of the freed slaves to enter into marriage agreements as well. Once informed of the law, thousands upon thousands began to report their marriages to county courts.

Overcoming the hurdle of legal marriage was only the first step. For several decades after emancipation, interracial marriage continued to be a legal abomination rendering lots of couples helpless and at risk if they shared their love for another race. In the ’60 states began to address this issue but on a federal scale it continued to be illegal until the Lovings.

Mildred Loving was of Cherokee, Portuguese and African American descent. Richard Loving was white. The couple met in high school in Virginia (which adhered to strict Jim Crow segregation laws) and fell in love. In June 1958 the couple traveled to Washington, D.C. to get married, evading Virginia’s laws which made interracial marriage illegal. When they returned home to Virginia after being married, the police raided their home and told them the certificate was not valid. The couple decided to fight and took it all the way to the top.

The Loving v. Virginia case of 1967 was a landmark civil rights decision of the U.S. Supreme Court in which the Court ruled that laws banning interracial marriage violate the Equal Protection and Due Process Clauses of the Fourteenth Amendment to the U.S. Constitution.

Given the plethora of countries and cultures from which the slaves were brought, black weddings have garnered a robust collection of traditions and themes that have evolved along with the journey to freedom. Black weddings are a celebration of love and history, and with them come the most powerful, meaningful rituals. Themes of unity, commitment and honor are woven through these beautiful traditions. Below are just a few of the ones we’ve seen at weddings. { all videos are by Mae B Films}

Taste of the Four Elements

Thought to originate from the Yorùbá culture of West Africa, this tradition incorporates four distinct flavors meant to represent the four emotional “flavors” of marriage. During this ritual, the couple is to share in the tastes of something sour, bitter, spicy, and sweet. It’s seen as a testament of the couple’s willingness to stay together “for better or worse, for richer or poorer, in sickness and in health.”

In this traditional ceremony, one of the family  elders pours either  liquor or holy water in each of the four cardinal directions (north, south, east, and west) to honor both the ancestors and those recently passed. This elder usually shares their wisdom, advice and blessing with the couple. Libation ceremonies have roots in many African cultures.

As outlined earlier, during slavery, African Americans were not allowed to marry.  Rather than an ordained minister legally conducting a wedding, slaveowners would fetch a broom and have the enslaved couple jump over it. Jumping a broom was meant to signify their commitment to one another. Many still incorporate this tradition as an ode to their forefathers.

In some African cultures, a bride and groom’s wrists are tied together with either cloth, rope, or braided grass after which an elder prays over the couple’s union for long life and till death do them part. The meaning behind this tradition is to represent eternal unity. 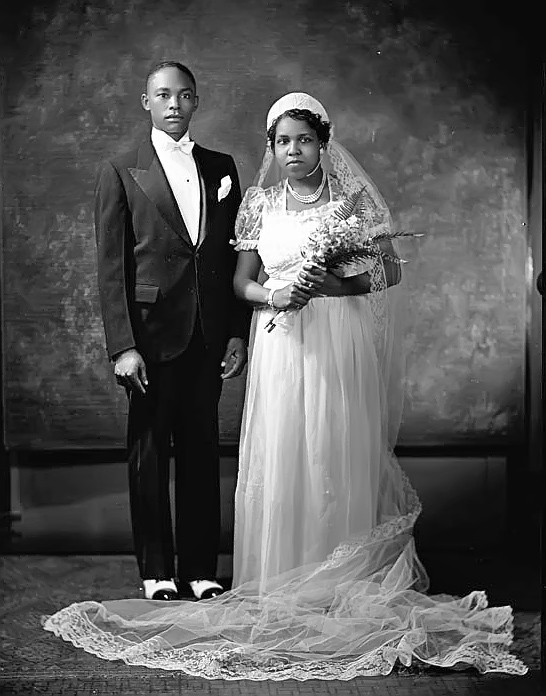 As you can see, black love has stood the test of time and has made it through so much adversity. It is why as a culture we choose to always celebrate with meaning. Each person represents a journey and the people who have come before us. From the traditions, to the fashion, the music to the dance, there’s so much timeless inspiration in black weddings. Black culture dictates so many facets of popular culture as can be seen in our celebrations.

Here is a beautiful Spotify playlist of love songs recorded by notable Black artists from each decade (1920-present day). Songs on the playlist from 1970 to 2020 are popular choices for the First Dance at Black wedding receptions.

Now more than ever it is important to highlight the voices, the relationships and the impact of Blackness not just in America but in the world. Our human rights as black people have been hard fought for. Our love like our freedom, has been hard fought for. Black lives and all that comes with them matter. They always will, and we are grateful for the sacrifices of our ancestors that came before us. The world is most certainly not where it should be when it comes to equality and its treatment of Black people but it is our hope that the change has started and we will look back (just like we have looked back today) on this point in history and speak on the change it inspired. One thing we know for sure, is that Black people will always thrive, and will always rise, no matter the circumstances.

Black love, in all its forms, is resilient and enduring.

Dear Black Child .. a love letter to your parents

Diversity Action Plan: How to Make Room in the Wedding Industry

Couple’s Shoot in the Mountains with Stylish Groom Inspiration