Our Bling of the Week series is fast becoming one of my favorite regulars on the blog. Today we’re excited to share this week’s sparkler and the adorable love story it comes with. Enjoy!
How He Did It

On December 21st, Larrell took me to JFK airport for my flight to Chicago for the holidays. Since meeting, we had never spent a holiday apart, so I was understandably melancholy before I boarded my flight. Larrell assured me that on Christmas Day he would “make sure it felt like he was right there” with me. Thinking nothing of it, I spent the next few days preparing for the holidays and going to an “impromptu” manicure/pedicure appointment with my little sister, Chelsea. On Christmas Eve, our family went downtown to one of our favorite restaurants, Le Colonial, for a pre-mass dinner. After we ordered cocktails and appetizers, I looked down at my phone, wondering why I hadn’t heard from Larrell after my last text. This thought was interrupted by the maitre d’, “Excuse me, there is a phone call for Melissa Smith?”. Too surprised to suspect anything, I followed him to the front of the restaurant where Larrell stood smiling.

Thinking this was the best Christmas present one could ask for, I began to lead Larrell to the table. “Get your coat,” he told me while he waited by the front. So excited, I did not even realize that my father and sister followed, videocamera and iPhone in tow. 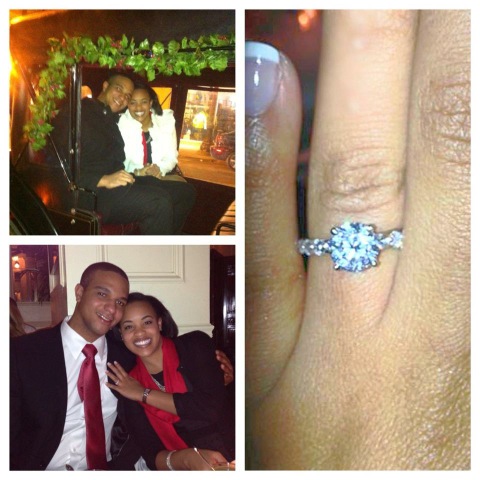 When the doors of the restaurant opened, we were greeted by a beautiful horsedrawn carriage decorated with holiday holly and garland. We were introduced to Bruno (driver) and Fredo (horse), bundled up, and taken around the city. As we cruised down Michigan Avenue, Larrell turned to me and popped the question!!! After recovering from the shock of the best Christmas present ever, I screamed “YES!”.

What a Merry Christmas!!!
Melissa and Larrell’s Engagement Shoot by Riverbend Studio