Gosh there’s just something about proposal stories. Today we have an awesome proposal at above 1000 ft. Chiedu with help from a few friends proposed to Chinenye across the famous Prudential Center building in Boston. I love, love, love! The couple got married two weeks ago and we wish them everything great and wonderful about marriage. Congratulations Cee and Cee!
The Story
It was a sunny day of May 12 2012, I had just completed finals for my graduate program and was set to graduate the next week. I was in such a laid back mood because all the pressure from school was finally lifted and I was just glad to have my life back. Chiedu informed me that he had plans for us to do something fun that day since I just got done with finals and I was leaving Boston for 4 months for an internship in DC (made perfect sense). I told him that we had a prior obligation at noon the same day but he calmly requested that we leave early so as to make it to this “plan” he had for us. We set out for Boston around 2pm after our noon obligation but I had no clue where we were going to. We arrived at a helicopter pad and he said to me “Surprise, we are going on a tour of Boston!” I was excited and terrified at the same time because I am not a big fan of flying. 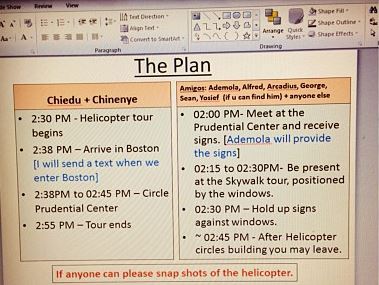 The helicopter attendant greeted us and told us exactly where to sit (this was strategic). We took off and I held on to Chiedu’s hand so tight because I was so scared of being so high up in the sky in a tiny helicopter. We approached the Prudential tower and the helicopter guide told us all these interesting facts about the tower. All of a sudden he points to the tower and asked us if we see a sign on the building. I could not see the sign he was referring to and I honestly was not trying to move around the helicopter too much for fear of it crashing (lol). The pilot decided to circle the prudential tower again just so we could get a view of the sign but this time he got a little closer.

He asked again “do you guys see that sign?” and of course I saw it this time. I saw a big and bold MARRY ME sign on the prudential building and I started screaming. I immediately looked at Chiedu and he was holding up a beautiful engagement ring saying some sweet nothings to me. I could barely hear him but I knew he was asking me to marry him haha. I guess I hadn’t said yes so he asked me when I would give him an answer and I screamed yes! yes! yes! By this time, the tears had started rolling in. Tears because I couldn’t believe this was happening to me. I couldn’t believe I got such an out-of-the world proposal and I couldn’t believe I was going to be someone’s wife. I was so grateful and happy and was ready to be done with the helicopter tour so I could jump and scream properly. Chiedu got his friends to hold up the MARRY ME sign from inside the top floor of the prudential building. The excitement and euphoria was so overwhelming that I did not shut an eyelid that night. I was literally up for 24 hours chatting with people and reliving that moment over and over again. Thanks for making me the happiest girl in the world!!!